It all starts with chlorine, and this is something most people are familiar with. Chlorine is the most commonly used chemical to kill harmful bacteria and pathogens which could otherwise live in pool water. 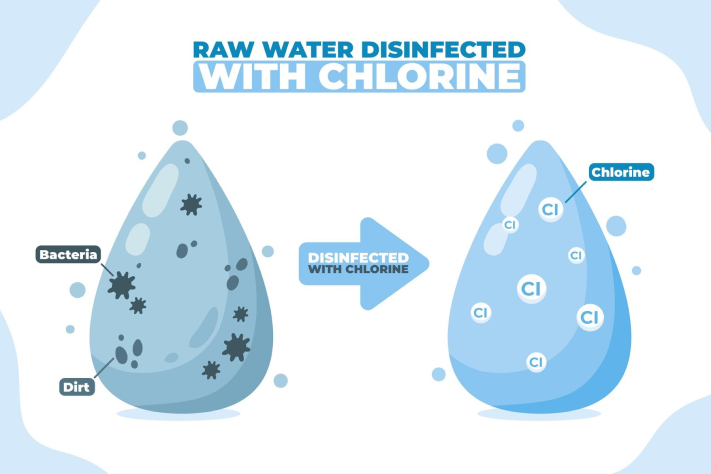 The exact mechanisms by which chlorine eliminates bacteria is not important for our purpose, although you can read more about chlorine on Wikipedia if you are curious. But the story doesn’t end here — there’s one more property of chlorine that must be considered. That property is how chlorine reacts when exposed to sunlight.

Sunlight breaks down chlorine over time, drastically reducing its effectiveness within even just a few hours. To compensate for this, an additional chemical is typically used as a chlorine stabilizer, reinforcing the chlorine to withstand the sun’s rays for much longer. The best and most commonly used chlorine stabilizer is cyanuric acid. 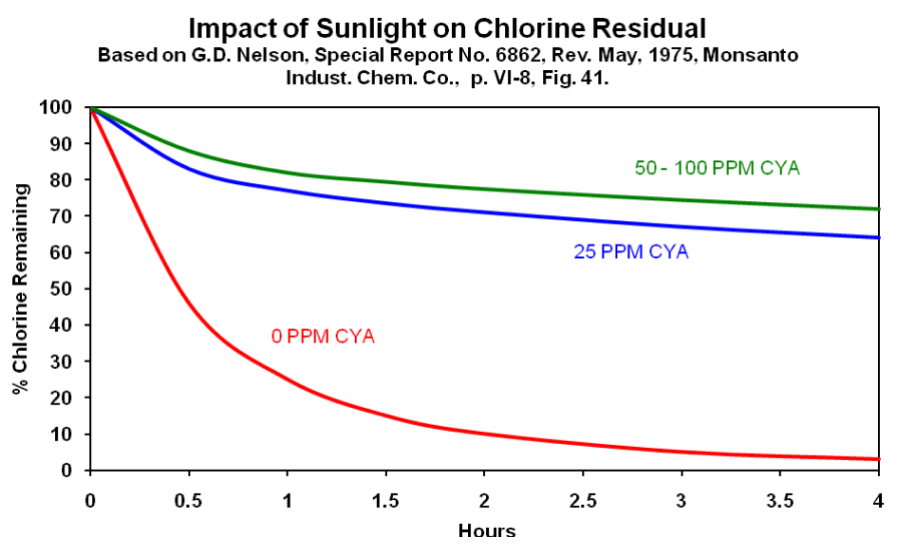 The chart above shows the effects of sunlight on chlorine, given three different levels of cyanuric acid. The cyanuric acid level is abbreviated as CYA, and listed in parts-per-million (PPM).

First, look at the red line. This shows the normal behavior of chlorine exposed to the sun, without any cyanuric acid. The steep dropoff of that line shows that the chlorine’s effectiveness drops to 50% after just 30 minutes. Within several hours there is almost no chlorine left at all. This is the problem that cyanuric acid is introduced in order to solve.

The blue line shows the results of introducing a modest amount of cyanuric acid (25 parts per million). Even with such a low concentration, the chlorine is drastically reinforced. It still drops off a bit, but then stabilizes at around 70% concentration after a few hours, and stays that way for a long time afterwards.

It seems like cyanuric is the miracle cure! Its powerful synergy with chlorine is irrefutable, and this is an essential tool for pool maintenance. Does this mean you can just run down to the pool store, grab a jug of cyanuric and just dump a bunch into the pool? After all, more must be better, right?

The exact relationship between the bacteria cryptosporidium, the disinfectant chlorine, and the stabilizer cyanuric acid are a little more nuanced, and depend also on the ratio of cyanuric to free chlorine in the water. But the one important takeaway is this:

The 50-100ppm window for cyanuric acid concentration is the optimal ratio for residential swimming pools. For, commercial pools on the other hand, there should be a maximum of 50ppm. Outside of these ranges, there is just enough cyanuric to reinforce the chlorine, but not so much that it starts protecting cryptosporidium as well.
​
You can calculate the optimal amount of cyanuric yourself by using the volume of your pool and the ratios listed above, or you can consult the wisdom of a pool professional (a worker at any pool store would likely be happy to help you).
​

What happens if my pool gets out of balance?

Because of the complex chemical balancing act described above, sometimes pools can fall out of this fairly precise equilibrium. The ratio of chemicals in a pool are constantly changing slightly, due to numerous factors:

• Water is lost to evaporation, increasing the concentration of the chemicals remaining
• Water is gained through rainfall, diluting the concentration of chemicals
• Sunlight disables some amount of chlorine (even with the protection of cyanuric), reducing the overall concentration and also changing the balance between cyanuric and chlorine
• A multitude of other natural and random changes such as splashing, spillage, miscellaneous other chemicals introduced accidentally or on purpose, natural decay of the chemicals and organisms involved, etc.

It may seem simple to repair the balance of these two chemicals, chlorine and cyanuric — if one is too low, just add more! But you can’t always keep adding more and more chlorine (too much and it will become harsh on human skin). Adding more cyanuric in the proper proportions is easy, but if the levels of cyanuric becomes too high, little can be done. One method is diluting or even fully draining the pool. This can be expensive, and also wasteful of potentially thousands of gallons of water.

An clean and green alternative is recycling the water. That’s what Regenaqua does.
​
Book a pool recycling appointment today
Regenaqua